← back to
Rocksteady Disco
Get fresh music recommendations delivered to your inbox every Friday.
We've updated our Terms of Use. You can review the changes here. 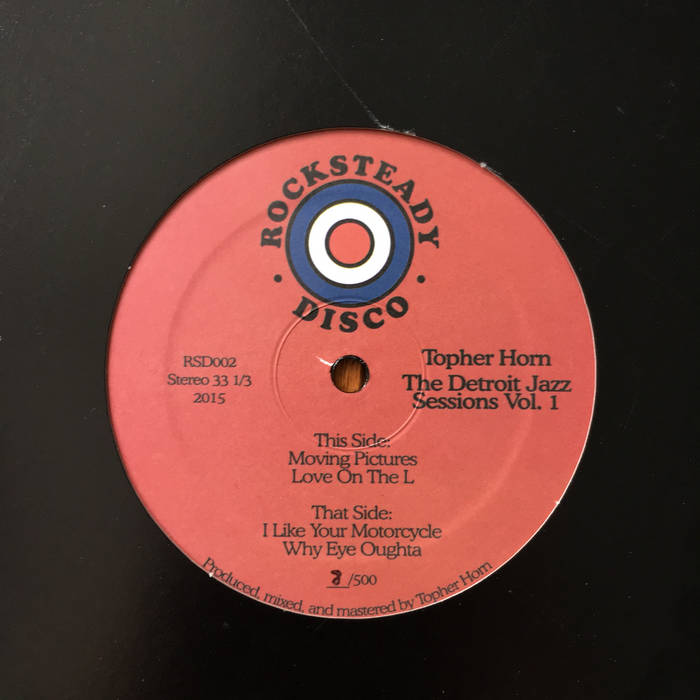 Topher Horn comes in with a release of Detroit deep house future jazz heat, dropping on Rocksteady Disco in July of 2015. Milky smooth and tracks to start the night, play at peak hour, or finish the party off.

Toph's been a long-kept secret here in Detroit, running a studio frequented by the likes of Jay Daniel, Mike “Agent X” Clark, Craig Huckaby, Seth “Dedikate” Carter, Alan Barnes, and more. He's a secret no-longer thanks to his first proper 12" + WEB release through Rocksteady Disco for both DJ heads and record collectors/listeners alike. This record will be the line in the sand regarding the up-and-coming producers out of Detroit in 2015. Don't sleep, unless it's a disco nap.

“Moving Pictures” starts off with a field recording of Topher's own homies at Polyfold Music at Detroit's legendary Cliff Bell's jazz club, then quickly morphs into one of the finest demonstrations of house music in a hot minute. It’s the perfect combination of classic drum machines and synthesizers with live acoustic performances from Topher himself.

“Love On The L” brings the mood back down after the explosion that is “Moving Pictures”. This tracks features field recordings of the L in Chicago, captured by Topher when he was visiting his lover across Lake Michigan. Combined with driving drums and a bouncy bassline this one’s as catchy as it is danceable.

Moving right along to “I Like Your Motorcycle” you’ll hear the most beautiful piano arranging on the entire release, performed by Topher himself on a variety of his personal keyboards including a dilapidated, Detroit-made Grinnell Bros 1918 upright piano and 88-key suitcase Fender Rhodes. The polyrhythms at the beginning of the track are for the brave and discerning DJs, before quickly morphing into a tune that’s equally foot-stomping as it is goosebumps-inducing.

On the vinyl release is my personal favorite: “Why Eye Oughta”, a slowed down beatdown boogie banger that must be taken all the way to the center every time. A fierce bassline coupled with chopped samples from Cliff Bells get this tune started, where it continues to build with more field recording samples, before finally exploding into synth and 808 heaven.

Lastly is “Sumthin Jazzy”, the perfect ending to the jazz house saga that is Detroit Jazz Sessions Vol. 1. Dark, ethereal, and downright nasty, this one’s for the heads. “Why Eye Oughta” is only available for the vinyl massive, while “Sumthin Jazzy” is available for all via WEB release or download code included with the vinyl.

Bandcamp Daily  your guide to the world of Bandcamp

Semiratruth joins the show to discuss their latest release, "loading..".